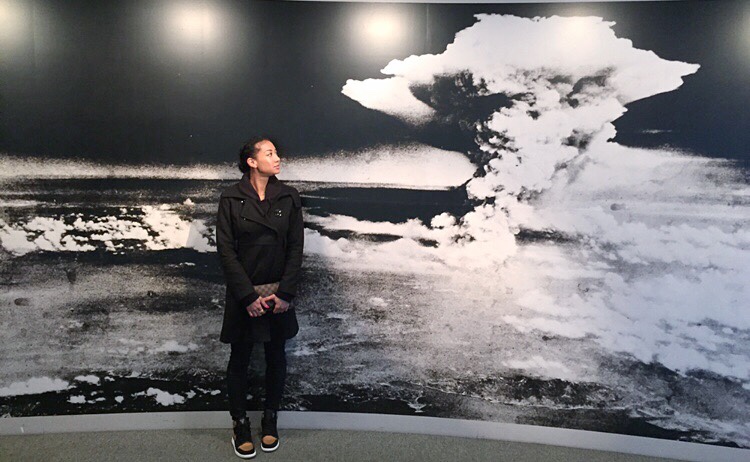 Hello there!! Keisy Myumi checking in. I recently visited Japan for two weeks to visit my family. When Sarah and Mary asked me to be a contributor to TCD, I was beyond excited to share my memories from my trip. It took me a while to muster up the courage to share this sentimental yet pivotal part of my experience. There were two legs on my journey. The first stop was to

visit the actual atomic bomb dome known as Genbaku Domu. It was the only structure still standing in the hypocenter of the Atomic Bomb that was dropped on Hiroshima August 6, 1945. Seventy years later, the entire city has been rebuilt including the Dome which remained in its original condition until now.

The second portion of my journey was to the Hiroshima Peace Memorial, which is less than a two mile walk from the dome. In front of the museum there is a fountain (pictured) that visitors can throw coins in to make a wish. An archway at the entrance leads to an eternal flame, which pays homage to the people and families that were affected. And then you see the Genbaku Domu. Being there, you could feel the love and the pride that was invested into creating the ambiance. It was almost intoxicating. There are also thousands of origami swans that are sent from children and adults worldwide yearly on display near the entrance. Talk about love! The museum itself was a somber, informational, and awakening experience. Artifacts including melted bottles, school uniforms, family heirlooms, and stories of survivors fill the memorial. I cannot say that this was the most enjoyable and fun part of my trip, but it was one of the most necessary parts. The only way to move forward is to understand the past. I believe visiting the Dome is a staple for anyone traveling to Hiroshima because it gives a true reflection of how it’s history has shaped the city and people. I can’t guarantee you will leave with dry eyes, but you’ll leave with a softer heart, with more compassion, and undeniably a better understanding of not only the Japanese culture but that of humanity.